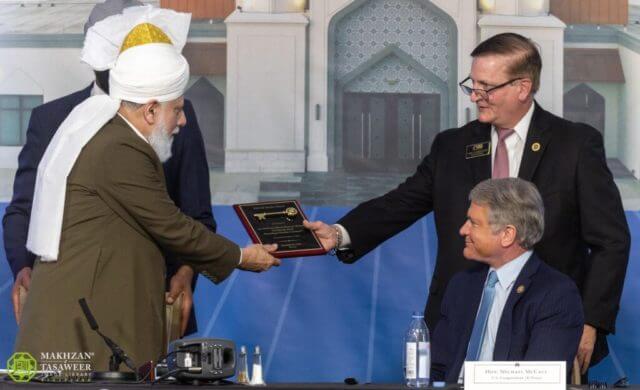 On 8th October 2022, (Munira Salam Tari)the World Head of the Ahmadiyya Muslim Community, the Fifth Khalifa (Caliph), His Holiness, Hazrat Mirza Masroor Ahmad delivered the keynote address at a special reception held to commemorate the opening of the BaitulIkramMosque (the House of Honour) in Allen, Texas, located in the Dallas chapter of the Ahmadiyya Muslim Community. His Holiness had officially inaugurated the Mosque a day earlier with his weekly Friday Sermon.
The reception was attended by around 140 guests, including politicians, faith leaders, and local residents.
The highlight of the event was the keynote address delivered by Hazrat Mirza Masroor Ahmad during which he spoke of Islam’s emphasis and focus on establishing peace within society, whilst also urging world leaders, public figures and all members of the public to play their respective roles in establishing peace in the world.